I wrote an userspace touchscreen driver using Python after a day of experimenting with both udev (Linux’s device manager) and python-uinput (Python API to uinput kernel module, which allows userspace input drivers to be created).

If you are here for the finished driver, you can pick it up from my GitHub repository here. However, if you’re interested in how I wrote my touchscreen driver, read on.

I bought a touchscreen for my single-board computer ODROID-XU4 as I was interested in developing a dashboard application that would display different kinds of useful information I could view at a glance, such as website uptime and disk usage. After a little searching I found a touchscreen that appeared to fit my use case to the letter: 5" screen and it uses USB for both power and touch, and HDMI for video. 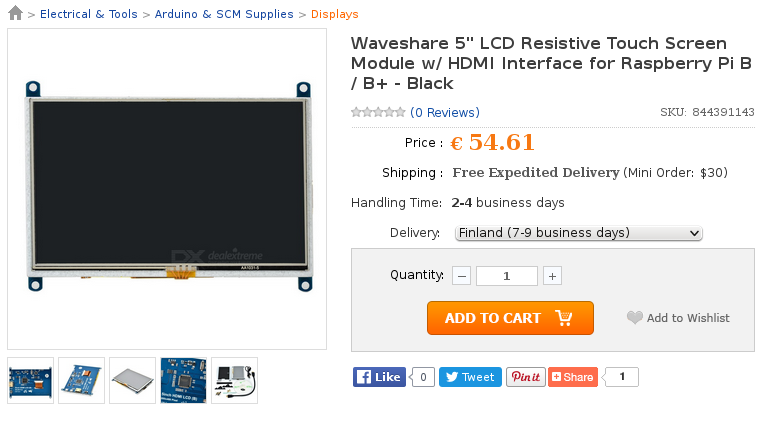 The product I ended up buying on DealExtreme

Unfortunately, this product had one glaring flaw: its touchscreen support relied entirely on a Raspberry Pi Linux image provided on a CD in the product packaging instead of an open source driver one could install on an existing Linux installation. There does exist a driver written in Python and available on Github, but it had a few shortcomings:

However, derekhe’s Python driver gave me a good starting point to develop my own driver. Although the device appears in the kernel log when it is plugged in, it gives no more useful information beyond the fact that a device file /dev/hidraw0 is created to listen to raw device input, and the device’s VID:PID is 0EEF:0005.

However, derekhe’s analysis had a concise explanation of the output. Assuming that the length for each message is 22 bytes (as it is in the 5" model), we can listen to the output in real-time using the following command and see what the device is trying to tell us.

We now have enough information to develop a driver on: the USB VID:PID of the touchscreen in question and the structure of the messages sent by the device. However, we still need to detect when the device has been plugged in so that we can react accordingly and load our to-be-written driver. Thankfully, udev (Linux’s device manager) works very well for this. With our device plugged out of the system, we can use udevadm to listen to device events (such as when a device is plugged in) in real-time. Do so by running the following command and plugging in the device:

As we plug in the device, a bunch of events are fired by kernel in response to the connected device. By adding a new udev rule, we can react to these events in a multitude of ways, such as by executing a script that starts our driver. This rule should be placed in /lib/udev/rules.d/ and given a name of form XX-myrule.rules where XX is the ruleset’s priority; a priority of 90 means that all rules preceding this number are run first before that rule. A README file in /lib/udev/rules.d gives us some useful guidelines on this:

Let’s start by creating a file called 91-waveshare.rules in /lib/udev/rules.d/ containing the necessary entries to make this happen:

This should appear self-explanatory for the most part:

Although we can run pretty much any Bash script in response to an udev event, there’s one limitation we need to keep in mind: udev kills any script started by a rule after a short while. To work around this limitation, we should create a service that is started in response to the device being plugged in. Assuming your system runs systemd, create a file called waveshare-touch-driver.service in /lib/systemd/system and fill it out as such:

It’s pretty bare as far as systemd units go, but it contains two entries we should keep in mind.

With the service in place, we can now write the script that’s started by udev when the “touchscreen was plugged in” event is fired: /usr/bin/waveshare-touch-driver.sh:

The script is very short; we write the device path we had received from udev as an environment variable to a file, which identifies our device and is read by systemctl when starting the service which starts our driver. udev runs the script with many other environment variables we could use, but in order to identify our device, we’ll use DEVPATH.

As of now, we now have an udev rule that starts a service representing our touchscreen driver, which is the last thing we need to write in order to get everything working.

Before we start writing actual Python code that make up our driver, you need to install two libraries we’re going to need:

Assuming you’re on Debian or another similar distribution, the following commands should install all the dependencies we need for this task:

After this, we can finally start writing the driver that’s going to read the device’s stream of data and turn it into events that allow the user to actually interface with the device. Let’s create /usr/bin/waveshare-touch-driver.py and get to it:

Aside from the modules we have to import and the argument parser, we derive the device’s sysname from the full device path and start the uinput kernel module (in case it hadn’t been started yet) by calling modprobe uinput, which is a precondition to creating and starting our userspace driver.

After that, we create a Pyudev context that allows to iterate through all of the matching devices to find the same device passed by udev through the DEVPATH environment variable.

Again, recall that we need to figure out the serial number for this particular device, so that we can give it a meaningful name. We’ll use a new method to iterate through a different, but mostly similar list of devices to find the serial number, filtering by the device’s sysname (eg. 3-1.1.1.4) instead of the device file name (eg. /dev/hidraw0). In my case, the serial number also had an unprintable character that wouldn’t appear when printing the serial number but would throw the string comparisons off; we also remove such characters here to prevent any undue misery caused by two identical looking strings not evaluating to being identical.

Continuing on after we’ve retrieved the serial number, we retrieve the path to the device file (of form /dev/hidrawX) which we’ll be using to read the device output.

Now, it’s the matter of writing the method that opens the device file for reading and reacts accordingly when the user presses somewhere on the screen.

Here we create the uinput device that we will be using to emit events (screen touched at (X,Y) position, press released) which will then lead to corresponding events happening on screen: when user presses the screen, the pointer is moved to and pressed on that location. Note here that we are also giving the created device a name that includes the serial number; this makes it easier for device-specific configurations (such as calibration) to be saved without mixing different devices together. In addition, we’ve also included tuples with the uinput.ABS_X and uinput.ABS_Y events. These tuples correspond to the min, max, fuzz and flat variables (eg. min=0, max=4000, fuzz=0, flat=0).

Next on, we open the device file for reading as we would do with any other file.

This is the first part where we determine the length for the messages sent by the device. As mentioned, these messages can either be 22 or 25 bytes long, so to determine how many bytes we should read at once, we read samples of the output, counting the amount of bytes from the first aa tag to the next aa tag, which should be followed by at least two zeros to prevent us from picking up the tag earlier by accident and giving us an incorrect packet length. After we’ve determined this, we can move to the second stage of the driver where we start emitting events that correspond to the user’s actions.

We unpack the message into variables containing the variables we need: X and Y coordinates of the touched spot and whether the user pressed or stopped pressing the screen.

Depending on whether the user has pressed the screen, we emit input events where we pass the X, Y coordinates, whether the screen was pressed and how much pressure the user is applying (which will be 0 for not touching and 255 for touching, since the device we have doesn’t provide a value for pressure). The events are pipelined together, meaning the messages are sent together atomically, instead of sending them individually one at a time.

If we fail to read the device file, we can simply assume the user has disconnected the device, at which point we close the driver.

At this point, our driver should be ready for action and look somewhat like this (apart from a few parts I’ve removed from the example for brevity) and assuming you’ve either reloaded both udev rules and systemctl units or rebooted the system, you should be able to plug your touchscreen in at a whim and have it working without manually launching the driver at all. That said, you’ll probably want to calibrate it using xinput-calibrator before putting it into real use.

After all the work you’ve done, you should now have a working touchscreen for the touchscreen linked in the beginning of this blog post. Though the driver we wrote is slower than a kernel module written in C, it illustrates the point that once you are able to interpret the device’s messages, writing a working driver for a touchscreen would only require a few hours of work and a decent knowledge of Python.